The earliest mention of Loughton in Essex is perhaps to be found in a Charter of Edward the Confessor, dated 1062. Here it is written as Lukinton. About a quarter of a century later it is written in Domesday Book as Lochetuna and Lochintuna. During the thirteenth and fourteenth centuries Luketon is perhaps the commonest form and it is not.....

From Westmorland to Loughton
Waller's arrival in Loughton

.... William Watson died in 1869 and it appears that Jane Miller Waller, who herself had never married, came to live with her widowed friend. The Watsons had no children and Eliza only lived for two years after her husband’s death. We therefore find that Eliza Watson, after a number of bequests to hospitals for the poor and the incurable, left her remaining estate including the house at Ash Green and most of its contents, together with other property in Loughton, to Jane Miller Waller.

Little if anything is known of the first twenty years of William Chapman Waller’s life. His father had died when
his son was only four years of age, and his mother died when he was twenty-four years old. It is not clear whether his parents were well off, but it would not appear so from his mother’s will. This may account for the suggestion that William Chapman Waller’s aunt Jane effectively adopted him in 1874 and subsequently paid for his education. This would also explain why Waller appears to have been a mature’ student, not graduating from University College, Oxford, until he was thirty years old.

Following his mother’s death in 1874, it is likely that William Chapman Waller moved to Loughton to live with
his aunt at Ash Green. How soon thereafter he started his studies at University College, Oxford is not known but he graduated in 1880. Two important events happened shortly thereafter. In 1881 he married Emma Massey Cooke. Emma was to be known by the family as ‘Minnie’. Soon after William and Emma returned from their honeymoon, Jane Miller Waller, William’s aunt, died. Jane Miller Waller had become a wealthy lady by her
inheritance and William Chapman Waller and his sister Jane Elizabeth were to inherit much of their aunt’s estate. William Chapman Waller took over the house at Ash Greenand was to live there until his death...

ASH GREEN AND OTHER PROPERTY OWNED BY WALLER

It would no doubt please Waller to know that his house at Ash Green is today a Grade II listed building. Waller
researched the history of the house and adjoining land and during his ownership he rebuilt and extended parts of the house. He would be less happy to know that today his garden is only one third of its original size, as two small housing developments were built at the beginning of the 1980s on the north eastern and southern parts of his land. Waller refers to the history of Ash Green and how the land was acquired through the consolidation of various small enclosures, in both his book Loughton In Essex and his manuscript An Itinerary of Loughton. This provides an interesting insight into the history of this part of Loughton and its inhabitants of the nineteenth and early twentieth centuries. I can do no better than to quote an extract from An Itinerary of Loughton which Waller wrote in December 1911. I have added some clarifications in italics. 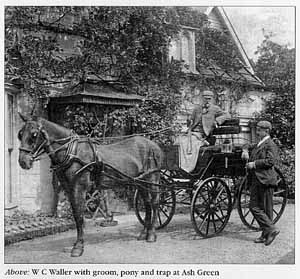 ‘The nucleus [of the land at Ash Green] was the cottage and orchard late
in the tenure of George Woolard and now of Thomas Matthews, which
passed in 1747, as part of the manor of Loughton, to the Whitaker
Trustees, a part of which cottage still remains embedded in the
subsequent extensions [of the house at Ash Green today]. Of this
cottage and land of some 3 roads and 35 perches, Charles Lane had a
lease for a year from Anne Whitaker dated 29 July 1812, at a peppercorn
rent and a release in fee on the next day. In February 1812 Thomas and
Susannah Matthews sold a 1/4 acre, late property of the vendor’s father
for 17 guineas, covenanting to make surrender or deed if necessary, this
land said to be adjoining his premises. Mr Lane bought this land from Mr
Hatherill in April 1812 for £30. This appears to be the far end of the
garden [the orchard] opposite Sunnybank [on Woodbury Hill] but if so,
between it and Mr Lane’s other acquisition (Matthews’ cottage) was
interposed a cottage and garden, the history of which begins with a
Court Roll of 1795, when Benjamin Bigg had a grant of 8 rods of waste,
which would appear to have extended itself as time went on, to build
a cottage......'

The old wooden cottages opposite the Gardener’s Arms at the north west end of the Green date back to 1715 when the lord of the manor granted to Ann Bridge a cottage and garden on the waste soil to be held by a rent of two capons at the will of the lord of the manor. From her the property passed through many hands, and in 1838 the one copyhold cottage had become six - three brick and three wooden. In 1842 Chalkley Gould, farmer, bought them for £200. In 1847 Henry Lincoln paid £210 for them and a court fine of £43. He, having enfranchised at Waller’s cost, for £195, sold the cottages to Waller in 1882 for £610, but as Waller
comments:

‘What with one thing and another, they cost me in the final event £1,192,
repairs being £317. They have returned perhaps 3% and are a vanishing
security. However, they kept the Hill [York] more or less rural.’

The adjoining detached cottage, Hatherill’s, Waller bought later. He was unable to find out much about the origin of this cottage. Hatherill was a forest keeper. The cottage was occupied for many years by the Eke family, whose father and son were blacksmiths. As a tailpiece Waller notes that opposite these cottages
in the hedge of Ash Green, by the orchard, a pillar box exists (it is still there). His wife was at Ash Green (in about 1880) when the pillar box was put up and laid a brick at the bottom, not thinking how often her letters would be posted there (until her death in 1939).

In one of his earlier notes (October 1894) Waller entered into a discussion on the derivation of Hoppit. (Little was he to know that a hundred years later the small housing development at the southern boundary of Ash Green was to be called Waller’s Hoppet.)

Waller first points out that the word may be spelled ‘hoppit’ or ‘hoppet’, and that he always regarded it as a diminutive of the Anglo-Saxon ‘hope’, a meadow. He found one or two examples of the latter locally, such as Bushy Hope in Chingford, Arsward Hope in Chigwell and Swans Hope in Loughton. However, in his review of all the Tithe Commutation awards for Essex he found that references to ‘hoppets’ in all cases are legion, being prefixed with a personal, and sometimes a local name, eg Garden hoppet, Hither hoppet, Carter’s hoppet. Another correspondent ventured that ‘hoppet’ was the name given to a small square grass enclosure, consisting of a couple of roods. Further north in the Eastern Counties the alternative term ‘pightle’ is used more often. 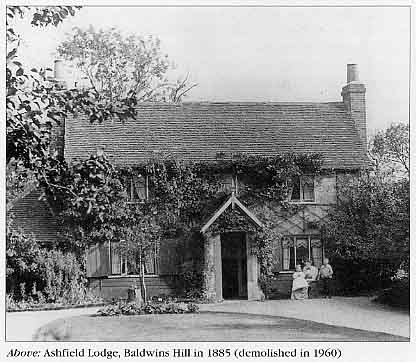 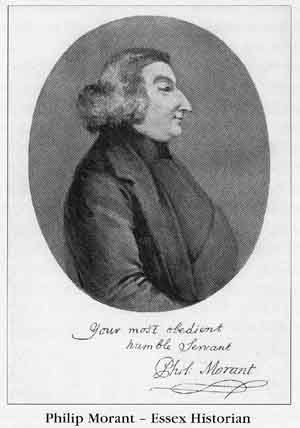